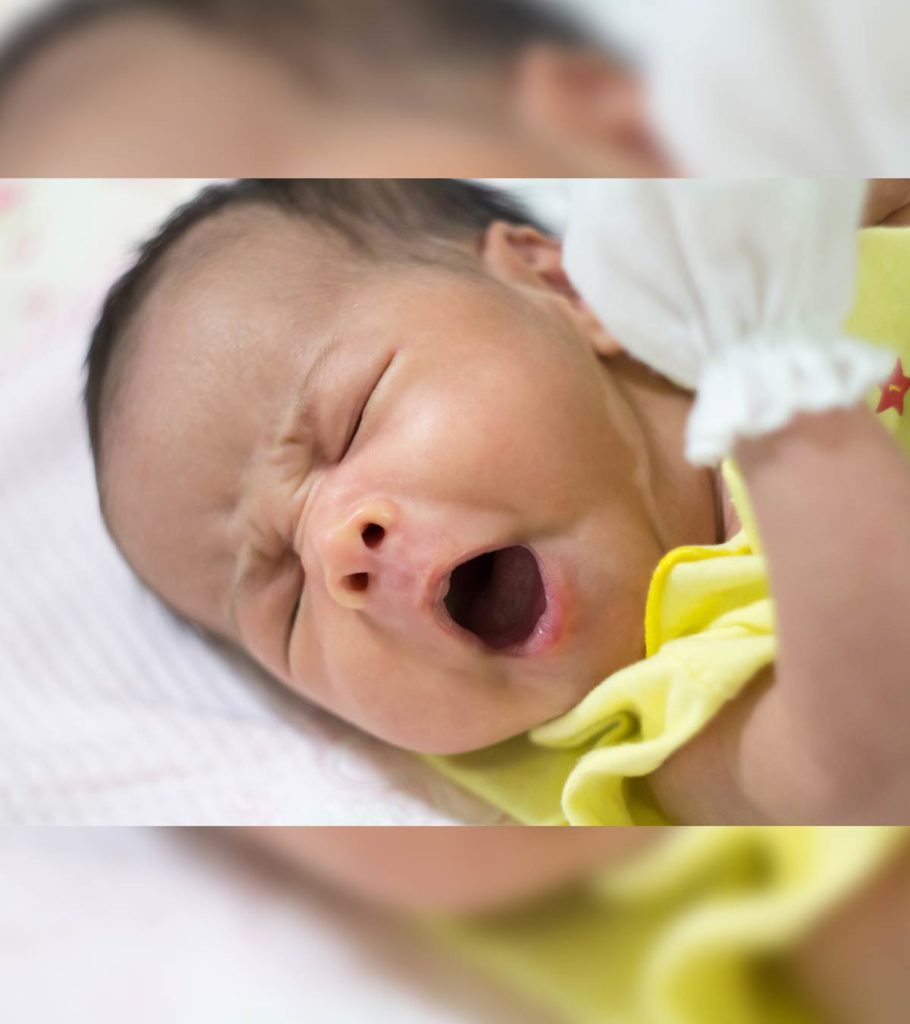 Babies usually gasp when something is stuck in their throat, such as extra mucus due to a cold. They usually grow out of gasping as their respiratory systems mature. Read about the different reasons that may cause gasping in babies and when to be concerned.

A newborn baby is born with non-inflated lungs that are filled with fluid. The baby takes their first breath in about ten seconds after birth, and this breath may sound like they are gasping for air(1). Beyond their first breath, the following conditions may cause a baby to gasp for air while breathing.

Infections of the nose, sinuses, throat, airway, or lungs are known as respiratory tract infections. Viruses such as rhinoviruses, influenza, parainfluenza, respiratory syncytial virus, enterovirus, coronaviruses, and some strains of adenoviruses are the leading causes of respiratory infections in infants(2).

Respiratory infections cause excess mucus secretion and inflammation of the respiratory tissues, causing gasping due to difficulty breathing. Other signs and symptoms include fever, cold, cough, sore throat, and pain in the ear(3).

Asthma is a disease characterized by chronic inflammation of the airways. The root cause of asthma is unknown (4).  According to the Asthma and Allergy Foundation of America, asthma can cause labored breathing, panting, wheezing, persistent coughing, difficulty sucking, and fatigue(5).

Smoking in the same room as the baby may irritate their respiratory tracts. It may also lead to asthma. Therefore, smokers should be discouraged from smoking in the house where the baby lives (4).

Sleep apnea is a sleep-related breathing disorder. Obstructive sleep apnea occurs due to the narrowing of passages between the nose and the lungs. Babies with sleep apnea may pause for breaths, gasp for air, and have noisy breathing(7).

Whooping cough is a contagious bacterial infection. Babies with pertussis infection make a whooping sound when they breathe in after coughing(8). The infection may also cause a baby to gasp for air. The vaccine for whooping cough could significantly prevent the risk of developing the infection.

Meconium aspiration syndrome occurs when the newborn inhales amniotic fluid along with the meconium while still in the mother’s womb. The meconium (baby’s first poop)may clog or irritate the airways, injuring the lungs and making it difficult to breathe. Babies with this condition may need to be admitted to the neonatal intensive care unit (NICU)(10).

Reflux happens when the muscle at the end of the esophagus is loose or opens up when not needed. It may cause food and stomach acids to flow upward to the throat, irritating the airways along the way. Severe or persistent reflux may lead to breathing problems in babies, causing signs such as gasping (11).

Some babies may gasp when the ambient air is dry. In such cases, the baby will be healthy and will not show any sign of disease or distress. Gasping due to dry air can be easily avoided by installing a cold-mist humidifier in a baby’s room.

When To See A Doctor?

You must consult a doctor soon if your baby displays the following signs.

Ways To Reduce Gasping In Babies

It is best to consult a pediatrician if you notice your baby gasping for air since it could occur due to serious conditions as well. General steps of care at home, such as avoiding allergy triggers, often help avoid the condition. You may check with the doctor if they suggest using humidifiers or vaporizers in the baby’s room to keep the airways moist and open.

MomJunction’s health articles are written after analyzing various scientific reports and assertions from expert authors and institutions. Our references (citations) consist of resources established by authorities in their respective fields. You can learn more about the authenticity of the information we present in our editorial policy.
This article was originally published by Momjunction.com. Read the original article here.
Share on Facebook
Share on Twitter
Share on Pinterest
Share on LinkedIn

BU researcher urges the U.S. to create a National Long COVID Compensation Program
Findings Explain Exceptional Auditory Abilities In Williams-Beuren Syndrome
Study finds spike in the “Years of Life Lost” among adolescents during COVID-19 pandemic
COVID-19 Associated With Increase In New Diagnoses Of Type 1 Diabetes In Youth, By As Much As 72%
18 Fabulous Fall Fashion Trends To Rock This Season