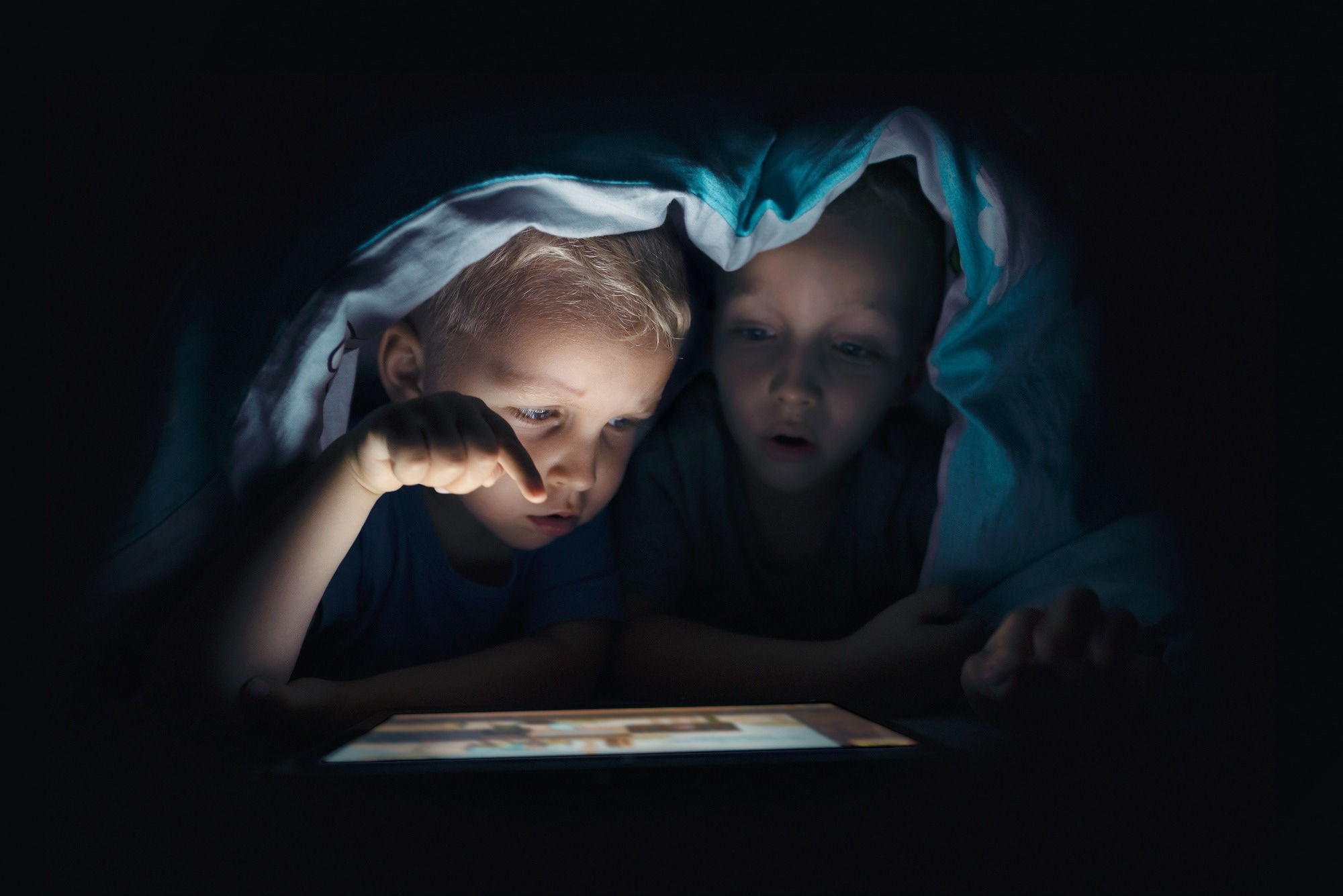 In a recent study published in the Pediatrics journal, researchers assessed the media usage by children during the coronavirus disease 2019 (COVID-19) pandemic.

Screen-based media has increasingly become an unavoidable part of daily life. Parenting needs fulfilled by screen media include rewarding desirable behavior, occupying and calming children, facilitating the preparation of meals and bedtime, providing enrichment, and supporting bonding between parent and child. Due to the COVID-19 pandemic, several schools and workplaces functioned remotely with the usual sources of entertainment either restricted or closed. This led to the screen media becoming a central point for learning and enrichment of children along with their supervision, socialization, and recreation.

In the present study, researchers assessed the impact of social and structural determinants of parent well-being and health inequities during COVID-19 on problematic usage of media by children.

Parents who had multiple children aged between six and 18 years were queried about child-specific questions concerning the child whose birthday was coming up next. This child was referred to as the reference child. The team used questions that reflected the recommendations of the American Academy of Pediatrics Media Use Plan to ask the parents to think about the media rules in their family before the pandemic and during the study period.

Problematic media usage by the reference child was assessed with the 9-item Problematic Media Use Measure-short form that estimated the elements of additive media usage among children. Additive usage included withdrawal, preoccupation, and unsuccessful attempts by the parents to control media usage. The team recorded the responses on a 5-point Likert scale with a probable range between nine and 40.

Parents were asked to complete the Patient Health Questionnaire-4 (PHQ-4), which is commonly employed to assess symptoms of anxiety or depression experienced over the previous two weeks. The team used the responses to create a scale having a probable range of zero to 12, with higher scores signifying more frequent symptoms. Parents also answered the COVID-19 Exposure and Family Impact Survey that recorded the impact of COVID-19 on their own exercise, eating, and sleep. The responses were assessed on a range of three and 12, with higher scores indicating a more negative effect of COVID-19 on behaviors related to self-care.

The study findings showed that the average score of problematic media usage was 22.95. Problematic media usage scores of 27 or more were observed for 32.6% of children aged between six and 10 years and 38.8% of those aged between 11 and 17 years. Among children aged between six and ten years, the team noted a slight reduction in the total number of family media rules implemented during the pandemic. This was observed in four of the seven rules as between prior to and during the pandemic, the number of mobile devices charged outside the children’s bedroom reduced from 49% to 45%, no screen usage was allowed during mealtime in 46% and 43%, limits on screen time during weekdays reduced from 29% to 21% while weekend limits reduced from 21% to 17% of the families assessed, respectively.

Among children aged between 11 and 17 years, the team noted a slight reduction in the number of rules implemented during the COVID-19 pandemic in comparison to before the pandemic. This was highlighted in five of the seven rules as between prior to and during the pandemic, no screen usage was allowed during mealtime in 43% and 41%, no screens were allowed for a minim of one hour before bedtime in 29% to 21%, restrictions on the shows and apps used by the child in 43% and 41%, limits on screen time during weekdays in 17% and 11% while weekend screen limits were implemented in 10% and 7% of the families assessed, respectively.

The team also noted a remarkable association between decreased parent self-care measures and higher scores of problematic media usage among younger children. Furthermore, child gender was also correlated to the problematic usage of media in the younger age groups, while girls scored 1.71 points less than boys

Overall, the study findings showed that family stressors were more related to the problematic usage of media by children than the number of media rules implemented in the family during the COVID-19 pandemic.