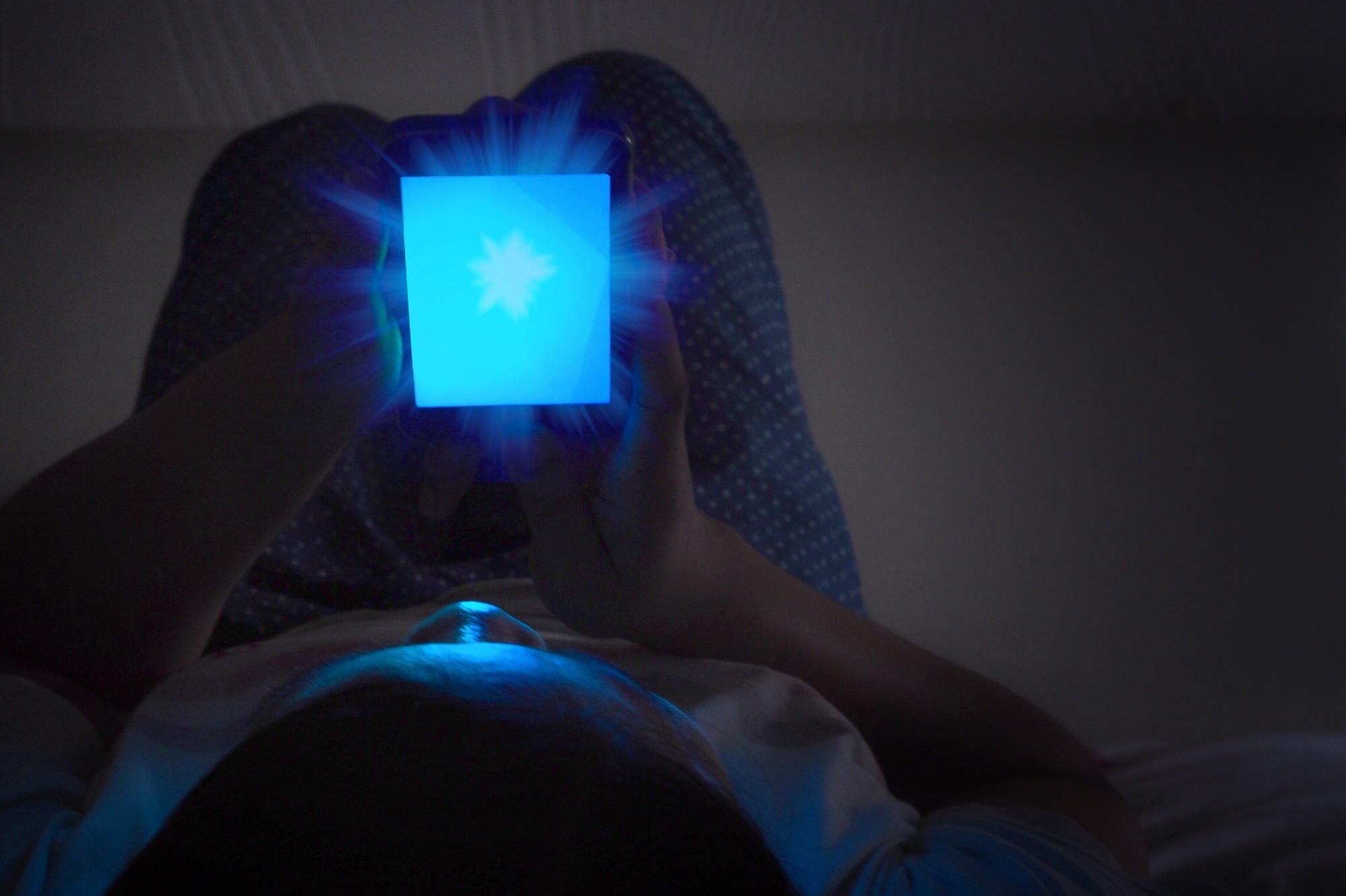 Exposure to blue light via regular use of tablets and smartphones may alter hormone levels and increase the risk of earlier puberty, according to data from a rat study presented today at the 60th Annual European Society for Paediatric Endocrinology Meeting. A longer duration of blue light exposure was associated with earlier puberty onset in the female rats, which also showed reduced levels of melatonin, increased levels of some reproductive hormones, and physical changes in their ovaries. The use of blue-light-emitting mobile devices has previously been linked to disrupted sleeping patterns in children. However, these findings suggest there could be additional risks for childhood development and future fertility.

The escalating use of blue light-emitting devices, such as tablets and smartphones, has previously been implicated in reducing sleep quality in both children and adults. This is thought to be through disrupting our body clock as blue light inhibits the evening rise in levels of the hormone melatonin, which prepares our bodies for rest and sleep. Melatonin levels are higher overall during pre-puberty than in puberty, which is believed to play a role in delaying the start of puberty. Puberty is a complex process that involves the coordination of several body systems and hormones.

In recent years, several studies have reported increases in early puberty onset for girls, particularly during the COVID-19 pandemic. The link between blue light exposure and reduced melatonin levels suggests that increased screen time, such as during the pandemic, may play a role in this reported increase. However, it isn’t easy to assess this in children.

In this study, Dr. Aylin Kilinç Uğurlu and colleagues in Ankara, Turkey, used a rat model to investigate the effects of blue light exposure on reproductive hormone levels and the time of puberty onset. Female rats were divided into three groups of six and exposed to either a normal light cycle, 6 hours, or 12 hours of blue light. The first signs of puberty occurred significantly earlier in both groups exposed to blue light, and the longer the duration of exposure, the earlier the onset of puberty. Rats exposed to blue light also had reduced melatonin levels, elevated levels of specific reproductive hormones (oestradiol and luteinizing hormone), and physical changes in their ovarian tissue, all consistent with puberty onset. At the 12 hours of exposure, rats also showed some signs of cell damage and inflammation in their ovaries.

Dr. Aylin Kilinç Uğurlu comments, “We have found that blue light exposure, sufficient to alter melatonin levels, is also able to alter reproductive hormone levels and cause earlier puberty onset in our rat model. In addition, the longer the exposure, the earlier the onset.”

Although Dr. Aylin Kilinç Uğurlu cautions, “As this a rat study, we can’t be sure that these findings would be replicated in children, but these data suggest that blue light exposure could be considered as a risk factor for earlier puberty onset.”

It is challenging to mimic blue light exposure equivalent to a child’s tablet use in rats. Still, the time-point of puberty in rats is roughly equal to that of humans if adjusted for rats’ lower life expectancy. In addition, the hormonal and ovulation changes that occur during pre-puberty and puberty in female rats are comparable to humans. So, despite the study limitations, these findings support further investigation of the potential health impacts of blue light exposure on hormone levels and puberty onset in children.

The team plans to investigate the cell damage and inflammatory effects detected after more prolonged blue light exposure since this could have long-term impacts on reproductive health and fertility. They will also assess whether using blue light to minimize ‘night light’ mobile device features can reduce the effects observed in the rat model.

Dr. Aylin Kilinç Uğurlu adds, “Although not conclusive, we would advise that the use of blue light emitting devices should be minimized in pre-pubertal children, especially in the evening when exposure may have the most hormone-altering effects.”

Introduction: In the last ten years, blue light (BL) sources such as tablets and phones have increased in every age group. Especially due to the Covid-19 pandemic, screen exposure has also increased in childhood. However, the effects of BL exposure in puberty aren’t apparent. Therefore, we aimed to examine the impact of BL exposure and exposure time on puberty.

Methods: Immature eighteen 21-day-old female Sprague Dawley rats were divided into three groups consisting of six rats in each group: Control Group (CG), Experiment Group-1 (EG-1), and Experiment Group-2 (EG-2). CG rats were maintained under standard conditions with 12/12-hour light-dark cycles. The rats of EG-1 and EG-2 were exposed to BL (450-470 nm/irradiance level 0.03 uW/cm2) for 6 hours and 12 hours, respectively. Rats were exposed to BL until the first signs of puberty and were euthanized. Serum FSH, LH, Estradiol, testosterone, DHEA-S, leptin, and melatonin were studied by the ELISA method. Ovaries and uterus were dissected for histomorphological examination.

The FSH, testosterone, DHEA-S, and leptin levels of all groups were similar. (p> 0.05) However, LH and estradiol levels of EG-1 were higher compared to CG. (p:0.027) There was a negative correlation between BL exposure, exposure time, and melatonin levels (ro:- 0.537, p: 0.048). Ovarian tissue was compatible with the pubertal period in all groups. As the BL exposure time increased, capillary dilatation and edema in the over tissue increased. Prolonged exposure caused polycystic over-like (PCO-like) morphological changes and apoptosis in granulosa cells.

Conclusion: Our study is the first to show the effects of BL exposure on puberty. Our study showed that exposure to BL and the duration of exposure lead to early puberty. In addition, PCO-like inflammation and apoptosis were detected in the ovaries with the increase in BL exposure time.

Studies show an increase in cases of precocious puberty and acceleration in puberty pace during the closure period compared to the pre-pandemic period. Our study demonstrated the effects of BL exposure on puberty and the relationship between increased exposure time.